Grab a cocktail and enjoy live music on the patio of the SHOW Bar at the Sheridan Opera House on Thursday, August 5 from 6-8 p.m. with Six Dollar String Band. This event is free and open to the public. By attending this event, you agree to this COVID-19 waiver.

A mainstay of Old Time music in Colorado for over a decade, the members of Six Dollar String Band play a passionate, eclectic, and refreshingly honest array of String Band music native to their home in the Centennial State.

The award-winning band’s second record, “Mayday,” is a 7” vinyl album that documents the early development of their distinct Colorado sound, as well as their special approach to presenting their recorded music. An EP at length, the album’s ripping fiddle and banjo tunes, backed with thumping bass and melodically-driven guitar, are woven together with audio collages that are composed from field recordings that band members collected onsite in Mayday, Colorado.

The band‘s most recent recording project is their most ambitious to date, yielding two separate albums entitled “Big Six” and “Fire On The Mountain”—the latter a double LP and the former an LP adding drummer Pat Dressen to the lineup.

Check out their music at SixDollarStringBand.com 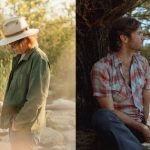